“Carbon monoxide (CO) gas is one of the most widespread and dangerous industrial hazards. It is the most common cause of occupational gas poisoning leading to death. It can be lethal at concentrations as low as 1000 parts per million (ppm).” WorkSafe BC. (1) Unintentional CO exposure accounts for an estimated 15,000 emergency department visits and 500 unintentional deaths in the United States each year. (2)

Ensuring a safe working environment is essential to worker health and safety. Carbon monoxide poses an unseen risk that can easily be monitored and thus controlled. Employers must, according to regulatory bodies such as WorkSafe, ensure workers are not exposed to CO levels above occupational exposure limits. The average indoor CO levels are 0.5 to 15 ppm with carbon monoxide monitoring OSHA limits not to exceed 50 ppm average over 8-hours.

CO monitoring is made easy thanks to Aretas Sensor Networks wireless CO monitor that measures and records real time temperature, relative humidity and carbon monoxide levels. This data can be accessed from any internet enabled device at anytime.

A Culver’s Restaurant in Menomonie, WI. recently hired Aretas to install wireless temperature, relative humidity and CO monitors in the front dining room and back kitchen areas of their restaurant because of a gas leak that the local Fire Department could not find when called to the scene just weeks prior. Custom alert levels were set on the online dashboard and upon review of the data Aretas staff contacted the owner to report a trend in the CO readings. Gary, the owner, suspected a gas line leak which was quickly ruled out when inspected by the plumber. 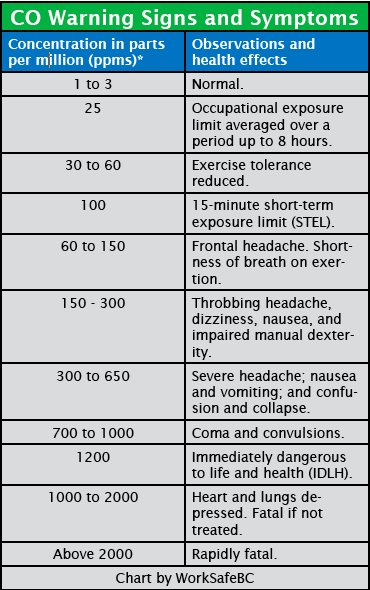 It was when Aretas sales rep Dan Rowe and Culver’s owner Gary Theelke sat down together to review the trends in the real time data that it was determined that, when the fryers were turned on for the first time for the day, that the exhaust fans were not turning on at the same time to vent any excess gas from the area in and around the fryers in the kitchen. This caused a spike in CO exposure that reached 100 ppm over a 25-30 minute time period. Culver’s then adjusted the timers on the exhaust fans to turn on just before the fryers are turned on for the first time for the day. Now CO levels are remaining within safe limits. Without Aretas’ real time monitoring, the CO exposure would have gone undetected.

Culver’s proactive approach was able to ensure the safety of their staff and customers. The Aretas carbon monoxide monitor alerted them to a potential hazardous situation. The key to success in this case was the ability to remotely monitor the CO in real time. The monitor did not just alert the Culver’s team to the carbon monoxide exposure, it showed them time stamped, step by step, minute by minute the rise and fall of the dangerous gas that ultimately led to finding the source of the problem and fixing it once and for all.