We recently had a very happy client contact us to share a great success story using our ice arena solution. 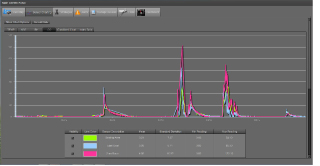 As shown in the graph on the left of the actual event CO levels rose to 123 ppm. The cause turned out to be due to be from combustion engine powered heavy equipment being run during routine maintenance. The management team lead by Mike Albrecht were able to take immediate action in ventilating the space before any true health issues arose.

“Carbon monoxide (CO) gas is one of the most widespread and dangerous industrial hazards. It is the most common cause of occupational gas poisoning leading to death. It can be lethal at concentrations as low as 1000 parts per million (ppm).” WorkSafe BC. (1) Unintentional CO exposure accounts for an estimated 15,000 emergency department visits and 500 unintentional deaths in the United States each year.

According to the IIHF (International Ice Hockey Federation), in Canada there are 13451 ice rinks and in the USA there are 2075 member ice rinks. Together, they service almost 1 million registered players. If you combine this number with the numerous other user groups such as public skating, figure skating, speed skating, non-registered hockey leagues, ringette, curling, and a wealth of other private rental activities we can see that the effected user group is vast.

Why it’s important to monitor at Ice Arena’s:

In an article by WorkSafeBC “In two separate incidents, arenas were evacuated after children were exposed to carbon monoxide while skating.

At one arena, children began to feel ill and two children fell into a state of semi-consciousness. During the emergency evacuation, firefighters took air samples and found carbon monoxide levels as high as 264 parts per million. The suspected source of the carbon monoxide was an ice resurfacer that had mechanical problems.

In the second incident, several minor-league hockey players were taken to hospital with signs and symptoms of carbon monoxide poisoning. A scissor lift used earlier in the day inside the arena is the suspected source.” WorkSafeBC.